First regional IAG (Industry Advisory group) meeting was held in Iceland last week in Reykjavík. The formation of the group is to provide input and advice on the implementation of the GREBE project in Iceland.  The Group shall meet once a year in 2016, 2017 and 2018 and ICI in in charge of organizing the meetings.

On the meeting GREBE project was introduced and members circulated about the project relevance in Iceland and how it could affect their business. Members discussed opportunities in renewable energy and technology, and knowledge transfer between GREBE partners.  Next meeting will be held in 2017.

Harpa Pétursdóttir chairman of The Association of Women in Energy (https://www.facebook.com/konuriorkumalum/?fref=ts) 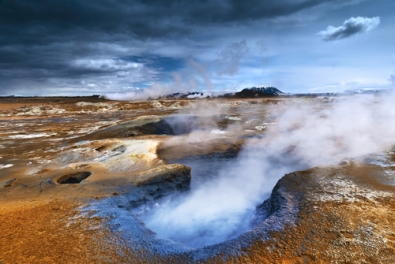 Þorsteinn Ingi Sigfússon, Professor in Physics, Laureate of the Global Energy Prize and Director of ICI (Innovation Center Iceland) wrote an article on research and Innovation in the energy sector in Iceland and how ICI has been a strong partner in that area. Here you can read a summary from his article.

ICI has for years now been alerted to innovation in the energy utilization sector.  Regarding minimizing carbon footprints, a large chapter was written on analysis leading to the fact that energy spending is extremely high in fisheries.  The carbon footprint reaches 1000 kg for each 1000 kg fish landed. That problem has led to new solutions and licenses in using light instead of nets by trawlers. This solution has resulted in lower use of energy, lower carbon dioxide emissions and less damage to the sea bed. ICI has formed a co-operation around this project with the Marine Research Institute and companies in fish-net production and fisheries.  This co-operation has trusted the foundation of this research even more. Furthermore a company called Optitog Ltd. has been founded around this innovation.

ICI has also been focusing on minimizing multiple kinds of excreta from aluminum industry here in Iceland including ideas and realization on using rest material in mortar, rock wool and related products. The company Gerosion Ltd. run by Sunna Wallevík was founded around this project alongside the SER (Start-Up Energy Reykjavik) project.

Another project that ICI has been working on is how to produce electricity from low temperature-heat that otherwise is lost (waste heat), mainly from power plants.  The source of this waste heat has its physical explanation as a result of the efficiency in producing electricity from geothermal heat.  This is very low and becomes even lower as the heat of the geothermal plant gets higher. In 2015 in the accelerator program Startup Energy, a project around low heat electricity production was developed. The challenge lies mainly in the small size of the power generator which is only 1 Kw but can produce electricity from heat as low as 70 up to 135 °C.

The company XRG Power was founded around this exciting project and is managed by Mjöll Waldorff. Among the owners is VHE in Hafnarfjörður and a Startup Energy group which is led by Landsvirkjun and Arion Bank.

As can be read above various inventions and innovations in the renewable energy sector are in process which is in line with the urgency of minimizing various carbon footprints and other waste.

Startup Energy Reykjavík 2016 are now accepting applications. Seven teams will be chosen into their accelerator to develop their startups.

‘Startup Energy Reykjavík’ is an accelerator program founded by Innovation Center Iceland, Landsvirkjun, Arion banki and GEORG in December 2013. The program is facilitated by Icelandic Startups and Iceland Geothermal on which the focus is on energy and energy related startups. The seven teams that are chosen receive 5 million ISK in capital stock and on 10 weeks they will work on their idea under support from 60 specialized mentors. At the end of the work period each team will present their idea.

The startups receive mentorship from successful entrepreneurs, experienced investors, industry experts and connectors who assist them strategize, prioritize, and expand their networks. Mentors will be visiting teams nearly every day of the program, debating and helping the startups.

Innovation Center Iceland will provide 10 mentors in this program and the General Director of the institute Þorsteinn Ingi Sigfússon is one of them.

Applications are accepted through F65.