After the 2015 Conservative manifesto pledge to “end any new public subsidy” for onshore wind farms, developers have been locked out of the Contracts for Difference (CfD) framework*.  New research reveals however that ministers could allow onshore wind bid on new contracts without contradicting its previous pledge to end all new subsidies.

The report** produced by industry experts Baringa Partners, commissioned by industry body Scottish Renewables, states that by allowing developers to bid in the first round of the auction, the industry could deliver an extra 1GW of capacity in the UK at the hugely competitive price of £49.40 per MWh. This is around half of the strike price agreed by the UK Government for Hinkley Point C nuclear power plant, after being adjusted for inflation.

Since the 2015 subsidy ending announcement there has been a marked slowdown in the rate of development. Neil Stuart, Chief Executive of Scottish Renewables said:

“Some companies are continuing to look at projects, but it is very difficult to see them going ahead without some sort of intervention,”

“If you want to deliver onshore wind capacity at a scale, which will make a meaningful contribution to the UK’s work to meet climate change targets and secondly keep bills down for consumers then you will need a CfD framework.”

Bidding on the first round of the CfD auction would not represent a subsidy as more money would return to the consumer over the last two thirds of the contract than the limited top up in the first third as the wholesale price of electricity increases. This would represent an overall saving for consumers.

The report also highlights the incredible reductions in the costs of renewables, particularly onshore wind, around the world. The decreasing price of turbines and auction mechanisms to ensure competition have seen the price tumble worldwide. The government can still now plan an important role in offering a low-risk route to market for subsidy free onshore wind.

The report that allows the UK Government to provide subsidy free support to onshore wind comes after a Conservative thinktank Bright Blue published a new survey*** claiming that the majority of Tory voters actually support on shore wind.

*The CfD mechanism is in place to stabilise revenue and cost for developers, thereby lowering the cost of capital and in turn minimises the cost of energy.

Four out of five people in Scotland support onshore wind according to a new poll. The poll for ComRes found 73% of people in the UK support the sector as a whole with this number increasing to 80% for Scotland. The poll was commissioned by climate charity 10:10 for the launch of their Blown Away campaign.

Although support for onshore wind development is more popular amongst city dwellers, higher support in rural areas was recorded than previously thought.

Max Wakefield from the climate charity 10:10 was reported as saying “The UK public love wind power and they don’t even realise. It’s plainly not true onshore wind is unpopular with the UK public. It’s time our politicians caught up. Onshore wind is already the cheapest tool we have to achieve energy independence, keep bills under control and tackle climate change.””

The poll also found that Scotland has 85% support for offshore wind farms and 83% support for solar farms whilst only 33% for fracking wells for natural gas.

The polling comes after the Conservative governments victory in 2015, with 37% of the vote, has all but ended windfarm developments through subsidy cuts, as their manifesto pledged to do. 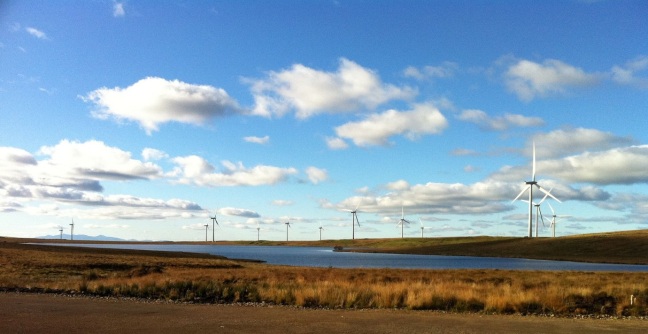 On Sunday the 7th of August Scotland provided 106% of its electricity needs from wind power for the day. Wind turbines provided 39 545MWh of electricity to the national grid whilst electricity usage from Scotland’s homes, businesses and industry only used 37 202MWh.

Sunday’s weather was not typical, with high winds across the country causing disruption to road, rail and ferry travel. These high winds were however very good for generation of electricity from wind turbines.

Whilst being the first time on record wind power has exceeded daily needs it may have happened before as a monitoring process for the data was only implemented in 2015.

These announcements have been hailed by WWF Scotland’s director Lang Banks, who said in January:

“2015 proved to be a big year for renewables, and the latest data makes clear that 2016 is already off to a flying start, with wind power alone meeting nearly half of Scotland’s total electricity needs during January.  I have little doubt that 2016 will be another record year for renewables.”

His predictions for a record year are proving to be true.

There is often seen to be a conflict between conservation charities and renewable developers. In the UK the Royal Society for the Protection of Birds (RSPB) is often perceived as one of the more vocal of these charities, with wind farms and associated bird displacement and strikes being one of the most of controversial issues.

However, in a newly released report “The RSPB’s 2050 energy vision” UK wide spatial analysis is undertaken, proactively identifying sites for renewable development which would have a low ecological impact (see Figure 1). 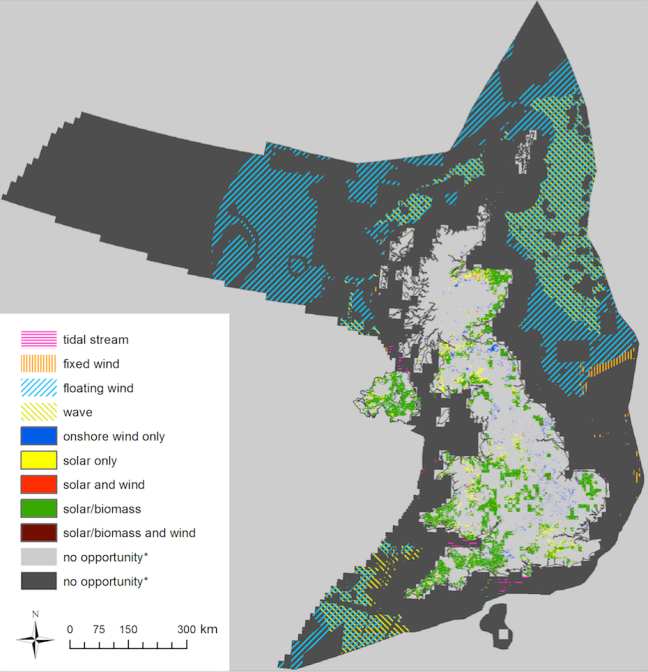 Additionally, the report suggests Scotland could increase its solar production to 30 times its current level. However, the low power density of this resource in Scotland, coupled with large reductions in subsidy levels, means exploitation on this scale is unlikely.

Such studies pre-emptively identifying areas which are environmentally unsuitable for renewables should help streamline the consenting process; with opposition on environmental grounds being decreased, reducing time and costs for developers. As such initiatives like this should be encouraged; however, the findings should be treated with caution. In this instance the huge reliance on floating offshore wind to create large headline figures should be noted; floating offshore wind accounts for ~90% of the resource identified. Such heavily reliance on floating wind should be treated with caution as although it certainly has huge potential the development of the world’s first commercial site is only just beginning Scotland. So as always, particularly on a 2050 timeframe, studies should be treated with scepticism but this study is certainly a proactive step forward in the relationship between one of the UK’s major conservation charities and the renewable sector.

For greater details on the report visit: http://www.rspb.org.uk/whatwedo/projects/details.aspx?id=350939