The Advice Notes aim to provide introductory material for entrepreneurs, startups and SME’s, considering to enter into the renewable energy sphere and based in the NPA regions partners to GREBE. The scope of the Advice Note covers regional, trade and industry, renewable energy (RE), technology information from Ireland, Northern Ireland, Scotland, Iceland and Finland. Different partner regions have different level of deployment of the various RE technologies covered by the Advice Notes. Thus, the level of information will vary depending on the level of deployment for each technology. For example, wind is not deployed on a large scale in North Karelia (Finland); however, it is widely deployed in Scotland, Ireland and Northern Ireland.

The focus of the Advice Notes is on regional information of some of the main economic characteristics sited as imperative, when making an informed choice, regarding which RE technology may be the optimal choice for a new business venture:

Hydropower is of the most reliable and cost-effective methods to generate electricity, as it can immediately respond to variations in electricity demand meeting both base-load and peak-load demand. The key advantage is that hydro power provides a steady and secure source of electricity supply. Furthermore, it very highly efficient (from 70 to 90%), has a long life span and attractive energy pay-back ratio. Other benefits of hydro are that it is a largely predictable resource of renewable energy (the annual generation can be predicted using historical rainfall data/catchment flow data).When considering the payback period for SHP, account should be taken of the lifespan of the system.

A general SHP project cost level is very difficult to predict as they are very project specific contingent on the local surroundings, hydro-technical constructions, turbines and electrical equipment. Small-scale hydropower uses water flowing through a turbine to drive a generator that produces electricity. The amount of a hydropower installation’s potential power output (kW) is directly related to two key variables:

Head – The vertical distance between the water level at the intake point and where the water passes through the turbine. Hydro projects can be categorized into three categories according to the existing head.

Flow rate – the volume of water flowing through the turbine per second, measured in litres/second (l/s), or cubic metres/second (m3 /s).

In June the UK Government released figures showing that renewable energy generation has seen a dramatic 11% increase in the first half of 2018 compared to the same period in 2017. Improved weather conditions for generation have seen wind generation in Scotland increase by 37%.

Paul Wheelhouse, Scottish energy minister, said: “These figures show that Scotland’s renewable energy sector is stronger than ever with almost exactly 1GW of new capacity installed since Q1 2017 and a strong pipeline of further projects still to be constructed.” Last year proved to be another record breaking year with provisional annual statistics showing that renewable electricity generation was up 27% on 2016 and 19% on 2015. The increase in generation now brings 69% of Scotland’s electricity consumption being delivered by renewable energy.

Scotland has long delivered on world leading electricity targets and is helped by an abundant onshore wind resource and historic hydro system. As the Scottish Government builds out new offshore wind and tidal projects the increase in generation only looks to continue. Recent plans for a new pumped storage hydro scheme on Scotland’s famous Loch Ness show a long term vision for the country’s electricity grid as it looks to increase penetration of renewables into its grid system. Climate change targets have been helped by the closure of Scotland’s last remaining coal powered fire station in recent years but ageing nuclear power stations and a “no new nuclear” policy look to add new challenges in the future. 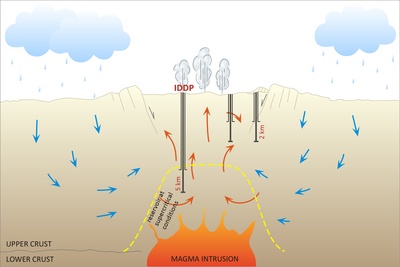 The Iceland Deep Drilling Project (IDDP) is a long term study of high-temperature hydrothermal systems in Iceland. The IDDP is a collaborative effort by a consortium of three Icelandic power companies  (Hitaveita Sudurnesja (HS) (since 2008: HS Orka hf), Landsvirkjun (LV) and Orkuveita Reykjavíkur (OR)), and Orkustofnun (OS), the National Energy Authority of Iceland. and the Icelandic government, formed to determine if utilizing supercritical geothermal fluids would improve the economics of power productions from geothermal fields.

The IDDP expects to drill and test a series of boreholes that will penetrate supercritical zones believed to be present beneath three currently exploited geothermal fields in Iceland. One has been excecuted and the second will be activated in mid september 2016. A drilling to a depth of about 5 km will be required in order to reach hydrothermal fluids at temperatures ranging from 450°C to ~600°C.

A feasibility study completed in 2003 points at that in comparison to the output from conventional geothermal wells, which are 2.5 km deep, a ten-fold increase in power output per well could result if fluid is produced from reservoirs hotter than 450°C .

A typical 2.5 km-deep geothermal well in Iceland yields power to approximately 5 MWe. Assuming a similar volumetric inflow rate of steam, an IDDP well tapping a supercritical reservoir at temperatures above 450°C and at a pressure of 23-26 MPa may be expected to yield ~50 MWe.

The first IDDP drilling was performed in year 2009 in Krafla. The second drilling is scheduled mid september 2016 at the Reykjanes geothermal field. The aim is to drill 3 km deep. The drill Thor is powered by green energy produced by Reykjanes power plant.

The main benefits from deep geothermal drilling are as here below: