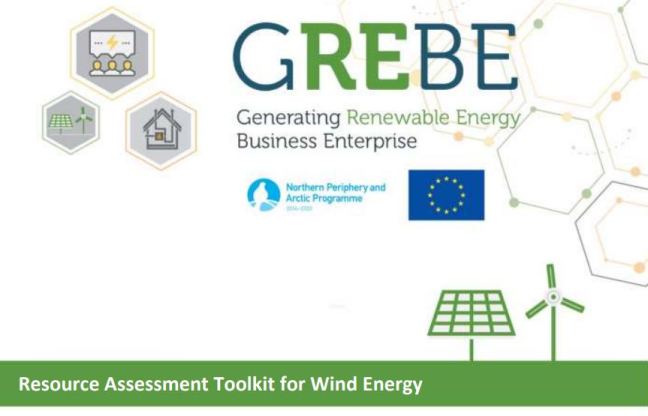 The scope of the Toolkit covers:

The first wind turbines for electricity generation were developed at the beginning of the 20th century. Thus, wind technology is one of the most mature and proven technologies on the market. In 2015, the wind energy industry installed 12.8 GW in the EU – more than gas and coal combined. Globally, the current wind power installation capacity has reached 435GW with a significant growth rate of 16.4% in 2014 and 17.2% in 2015.

Wind turbines offer the prospects of cost efficient generation of electricity and fast return on investment. The economic feasibility of wind turbines depends primarily on the wind speed. Usually, the greater the long term annual average wind speed, the more electricity will be generated and the faster the investment will pay back. However, it is important to access the wind power potential (WPP) at any prospective location to decide the capacity of wind resource for electricity generation within available time limits of wind duration. Hence, it is relevant to observe the wind characteristics and type of wind turbine technology suitable for any given promising location. These factors are very much helpful for wind power developers and investors to make a decision with respect to the economic constraints.

Details of the Resource Assessment Toolkit for Wind Energy may be downloaded here:

A new scheme designed to diversify the State’s renewable energy production and boost its chances of meeting key EU targets has been approved by the Government. The Renewable Electricity Support Scheme (RESS) is designed to help the State meet its renewable pledges up to 2030. Its first priority is to boost renewable energy production quickly to help turn 16 per cent of the State’s energy needs “green” by 2020. The scheme will incentivise the introduction of sufficient renewable electricity generation by promoting investment by community groups in green projects. Offshore wind and tidal projects will be central if the State is to meet its targets, while it is expected to also support an immediate scale-up of solar projects. Projects looking for support under the scheme will need to meet pre-qualification criteria, including offering the community an opportunity to invest in and take ownership of a portion of renewable projects in their local area.

The RESS scheme introduces a new auction system where types of energy will bid for State support. It is proposed that the scheme be funded through the Public Service Obligation Levy, which is a charge on consumers to support the generation of electricity from renewable sources. Individual projects will not be capped, but the Government will limit the amount that a single technology, such as wind or tidal, can win in a single auction. The auctions will be held at frequent intervals throughout the lifetime of the scheme to allow the State to take advantage of falling technology costs. The first auction in 2019 will prioritise “shovel-ready projects”. “By not auctioning all the required capacity at once, we will not be locking in higher costs for consumers for the entirety of the scheme,” Minister for the Environment Denis Naughten said. In effect it should make it easier for solar and offshore wind to get investment, yielding multiple billions for green projects over the next 15 years.

It is hoped renewable energy will represent 40 per cent of the State’s gross electricity consumption by 2020, and 55 per cent by 2030, subject to determining the cost-effective level that will be set out in the draft National Energy and Climate Plan, which must be approved by the EU and in place by the end of 2019. In addition the scheme is intended to deliver broader energy policy objectives, including enhancing security of supply. “This scheme will mark a shift from guaranteed fixed prices for renewable generators to a more market-oriented mechanism [auctions] where the cost of support will be determined by competitive bidding between renewable generators,” said Mr Naughten. The next step for the Government is to secure EU approval for the package, which typically takes six to nine months. It is estimated that the first auction will be in the second half of next year.

This project was a demonstration project under the GREAT Project (Growing Renewable Energy Applications and Technologies) which is an EU funded project under the INTERREG IVB NWE Programme. GREAT aimed to encourage communities and small to medium size enterprises (SMEs) to develop technological solutions for Smart Grid, Renewable Energy and Distributive Generation; to research and develop policy issues for regulatory authorities and to provide structured co-operation opportunities between SMEs and research institutes / technology developers.

Údarás Na Gaeltachta was lead partner on the GREAT Project, with two full-time staff allocated to the co-ordination and implementation of their project aims. Each Leim Enterprise Centre was selected as a demonstration site. The Sustainable Energy Authority of Ireland (SEAI) also provided funding for this demonstration project under the Better Energy Communities (BEC) programme, and Údarás Na Gaeltachta utilized the expertise available in the SEAI in the development of the smart grid.

The month of May showed that renewables can still play their part in providing large amounts of electricity even in summer months. Wind turbines alone provided enough electricity to supply 95% of Scottish homes thanks to windy weather. The 863,495MWh of electricity provided to the grid was an incredible increase of 20% compared to May 2016.

Solar energy was also increasingly able to supply 100% of electricity needs to houses fitted with panels across a number of areas in Scotland. Aberdeen, Dumfries, Dundee, Edinburgh, Glasgow, Inverness and Lewick houses fitted with photovoltaic panels benefited from 100% of their average use generated from the sun. Solar hot water panels also provided 90% of household’s average hot water needs in the same Scottish areas.

Across the United Kingdom there was also records broken on the 26th May with the National Grid reported a peak of 8.5GWh over a half hour period at midday. This was almost a quarter of total UK demand.

Scotland continues to increase its renewable energy capacity with an average annual increase of over 660MW since the end of 2008. Total installed renewables capacity sat at 8642GW at the end of 2016 of which the breakdown can be found below. This ever-increasing renewables capacity allows Scotland to reach renewable energy targets and climate change targets whilst still exporting low carbon electricity to its neighbours.