Can we remain hopeful despite not achieving renewable targets? Michael Doran, Director, Action Renewables and GREBE project partner discusses the issues surrounding Ireland’s progress towards 2020 energy targets in his article ‘Ireland’s Inconvenient Truth, We face a triple cost for not achieving our energy targets by 2020′

Ireland is not close to achieving its energy and emissions targets. We are currently one of four countries in Europe expected to miss the 2020 targets set out by the European Directive. The other countries set to fall short are Luxembourg, the Netherlands and the United Kingdom. Ireland is approximately 7% short of the 16% target. These legally binding targets from the 2009 Renewable Energy Directive, were set with the goal of reducing the greenhouse effect, securing energy supply, maximising renewables and saving money.

According to the SEAI, the cost to Ireland will be between €100-€150 million for each percentage point the country is short of the target. The SEAI report on Ireland’s Energy Targets: Progress, Ambition and Impacts depict the current progress towards achieving the targets, shown in the graph below, Figure 1. 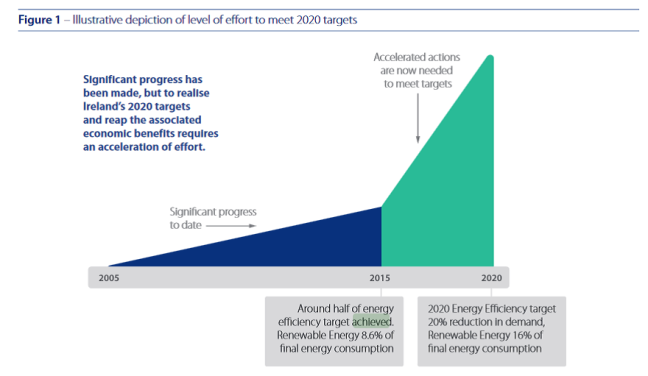 One thought on “What is the cost of Ireland not achieving its renewable energy targets?”